Last week was the week. I'd been waiting a long time for this ... the time to introduce Pocket Rocket to sheep to see what she did! 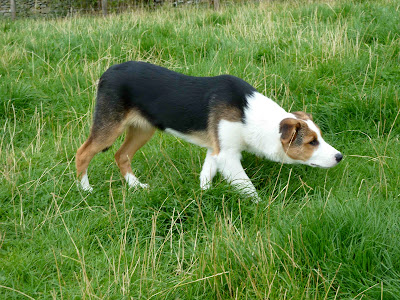 She has been 'working' the other dogs for some time now, and a couple of weeks ago developed the most amazing outrun when they all went through a gate, going out wide and dropping at the 12 o'clock position to me. Nothing close to being the same as working sheep, but ... what she was showing me was she had some very lovely, natural moves.

At 7 months old, it was time to see what she was made of. She has seen sheep in the distance, she has seen them in my friend's yard when they've been penned to worm, etc. However, I haven't walked her close to sheep and never through sheep. Until I decided what I wanted to do with her I didn't want to put her in a position where she showed interests only for me to flatten it, or not to have interest at all only for me to worry about it!

So, off we went, the Collie Mobile loaded with doggies and accompanied by my friend Sue to Thomas Longton, a very experienced handler, trialist and trainer and very importantly, the owner of Pocket Rocket's father!

I've given up editing the footage taken on Sue's mobile, so it's pretty much in its entirity. I also gave up trying to put explanatory titles in the footage.

The first 5 minutes' of Pocket Rocket's work is not included. She started off loose outside the round pen, just left to her own devices to see what she'd do. Well, she just had a general mooch around to start with, until ... a sheep in the pen moved. Then. Well, 1 circuit of the round pen running around fast and with tail held high. Then, magic, a slower pace and tail dropped to a beautifully relaxed manner - watching a dog's tail whilst working sheep is a big indicator of whether the dog is relaxed or not.

The first words uttered by Thomas were ... "she's stylish". Result!

Thomas took her into the round pen for a couple of minutes then it was my turn. That was a surprise, I hadn't expected to handle her - in my inexperienced hands I had concerns over wrecking what might be there. Needn't have worried!

Things to look out for in the clip - she starts off working on a long line. This enables a stop if needed ... that is, if she wont stop when requested you leap on the long line! Not always easy in a rocky, slippy, muddy round pen.


In this second video clip Thomas takes Pocket Rocket into a big field with sheep, again on the long line to start with. Not something that would normally be done at this stage of training, however, I am in the process of deciding whether to get some sheep. I have the offer of some fields for 6 months, maybe more, so it was a case of seeing what she was going to be like in the situation I may be working in a month's time.

I think given the space and the speed of the sheep she ... well, I'll let you make your mind up about how that was going to end!

So, the Pocket Rocket ... attitude, enthusiasm for life, intelligence by the bucket load and looks like workability. I wonder if there is anything she wouldn't do well ... am thinking she probably wouldn't be suitable as a pets for therapy dog - not yet awhile anyways!
Posted by a sheepdog diary at 22:20 2 comments: