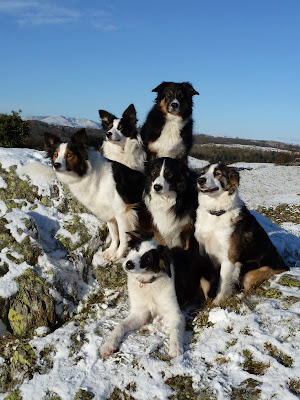 Snow arrived in South Lakes over the weekend, a light covering Saturday followed by a heavy fall later that evening. Snow, accompanied by blue skies and sunshine ... perfect weather to get out with the dogs and camera.
Our search and rescue pup was visiting for the weekend, so throw her into the mix and we've pretty much had a perfect weekend. The dogs have been doing their usual thing in the snow and I've been doing my usual thing of photographing them.
Womble Bum does a fine impersonation of a wolf ... 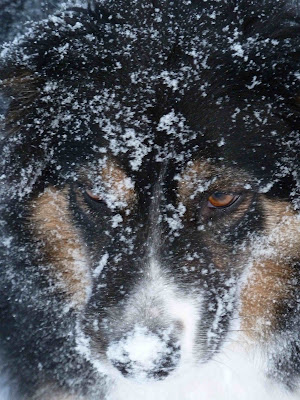 and loves playing the clown ... 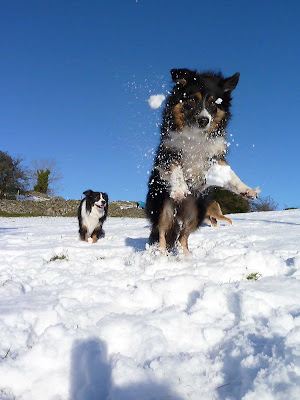 Some of the views and lighting have been stunning. This is a shot down the Lyth Valley towards Morecambe Bay taken just after a snow shower, with the cloud just starting to clear and the sun coming out ... 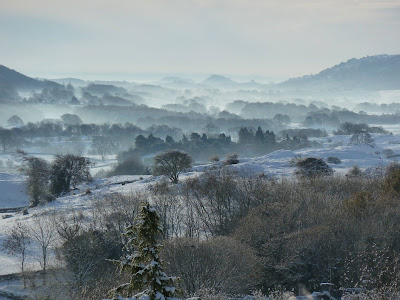 The Arctic Fox set perfectly against a backdrop of the Coniston range of mountains ... 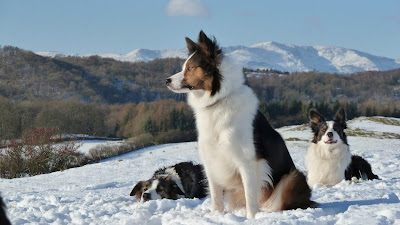 The Handsome Lad and Cafe Latte Girl working (or should I say 'walking') together ... 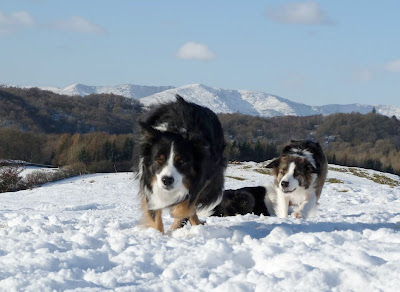 The New Boy surveying his surroundings ... 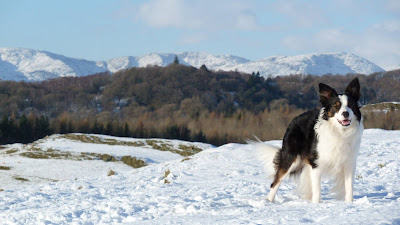 The New Boy photographed with his daughter - one of the sensational six pack of pups - our weekend visitor ... 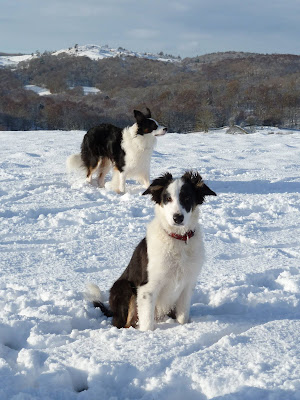 and pup with her mother, the very stylish Cafe Latte Girl ... 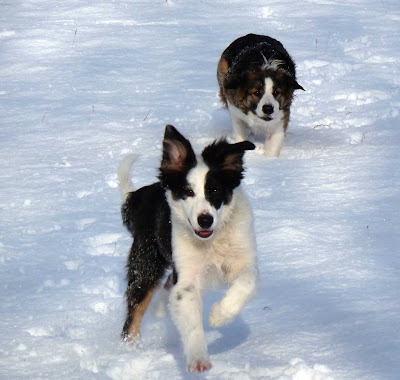 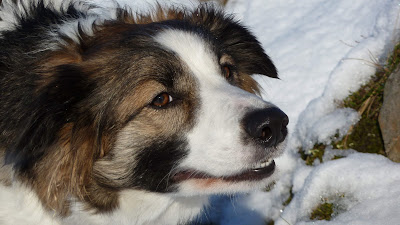 The truth behind ... The Collie Walk

Little did I know when I posted our video The Collie Walk on last week's blog that so many people would view it. OK, so we haven't attained mega star status but 14,000 views in one week is pretty good going for a small, unplanned video captured whilst playing in a field with the dogs.

I have enjoyed looking at the comments on the various forums. However, questions have been raised, was the behaviour in the video cued? Was it a planned event with helpers? Even some doubt as to whether the behaviour should be permitted as it may result in bad feeling between the dogs. So, time to set the record straight ... 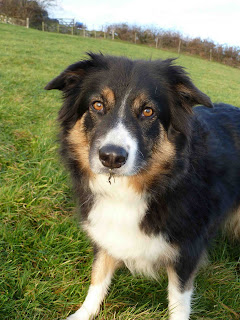 The Collie Walk was completely unplanned. A glorious day in a field, just me the dogs and camera. I’m still learning the video part of the camera - hence all the zooming in and out! If you watch the video it does become apparent where the focus of each of the dogs lies.

The senior dog is Womble Bum, she’s the one in a down closest to me. Her focus has always been on me unless there have been more interesting things to focus on ... a leaf blowing by in the wind, a blade of grass, a tennis ball ... you get the gist. 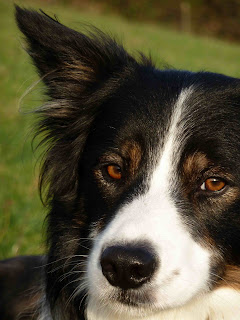 Next dog to come along was Handsome Lad, he’s the second dog to start ‘The Walk’. Watch carefully and you will see that he is clearly focusing on Womble Bum - a quick sideways glance to his left, well that's towards the flock of 35 Herdwick sheep in the next field!

Then came the third dog, Cafe Latte Girl. Something very special from a very early age, introduced to sheep at 10-weeks of age - it became very apparent then that she was incredibly stylish. Since that early introduction she has ‘worked’ the dogs when not working sheep. There is a 10 month gap between Handsome Lad and Cafe Latte Girl so it’s quite natural for her to focus on him. 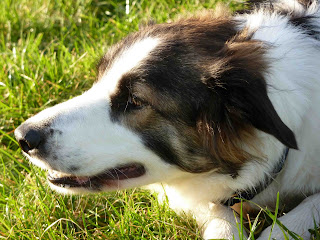 So where do the two Highland Hooligans, that’s the New Boy and Arctic Fox, come in? Well, Arctic Fox was the fourth dog on the scene, when she arrived Cafe Latte Girl decided she’d play surrogate Mum, so Arctic Fox has her focus set on Cafe Latte Girl - you’ll spot the pattern that’s developed! 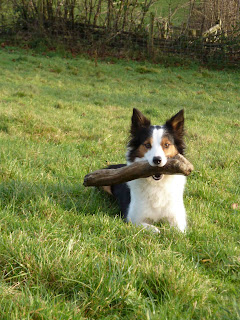 The Arctic Fox doesn’t tend to do ‘The Walk’ too often, though she can. She much prefers to run around the field hanging off CLGs collar.

The New Boy, fifth dog to arrive earlier this year, and the one who prompted the blogging, walks up beautifully on sheep, but he’s been a working lad from a young age and is quite clear with the boundaries! 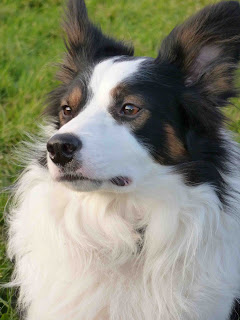 That’s the explanation behind the focus, now what’s actually going on in the video?

The only ‘forced’ behaviour was to put Womble Bum in a down stay when everyone else had put themselves into their own downs, quite naturally as that’s what collies do, about the field. Once she was down, the Cafe Latte Girl started walking up onto the Handsome Lad at which point I started filming - there was quite a lengthy bit of walk missed as the camera wasn’t on. When she came in behind Handsome Lad then I put a walk up cue onto him. So starts his walk up onto Womble Bum, CLG is still clearly focused on him.

The two Highland Hooligans are still on the hill, watching the others playing silly beggars.

As Handsome Lad gets closer to Womble Bum, another stay is given to her, and another ‘walk up’ to him just to bring him in a bit closer. Then the break, with a swift ‘that’ll do’, but look again, it is Womble Bum who starts the break and every one of them refers to her ... she is after all, my top dog. They all rushed around madly completely relaxed with no built up tensions and certainly no problems between them, ready to start the game all over again! I love my dogs!

We've had some glorious weather in South Lakes over the last few days, and we've been making the most of it. There's been lots of training dogs with sheep and we've been doing some obedience training. We've let the obedience work lapse just lately but with a course looming we need to get up to scratch.
On Sunday we awoke to thick mist, which rapidly started to clear as the sun rose. In just the time it took from getting to the field gate, fetching a camera and returning, visibility had gone from just 5 metres to this ... 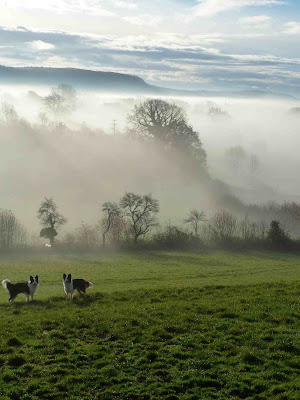 The depth of shadow created was just tremendous 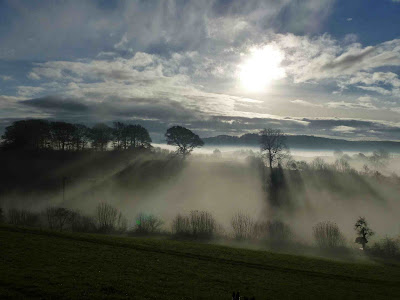 Monday morning was very cold, with a hard frost. The view towards Morecambe Bay was fabulous 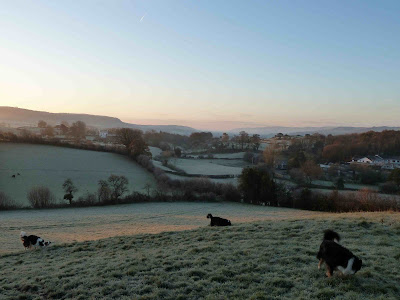 The dogs loved rooting around in the frosty grass 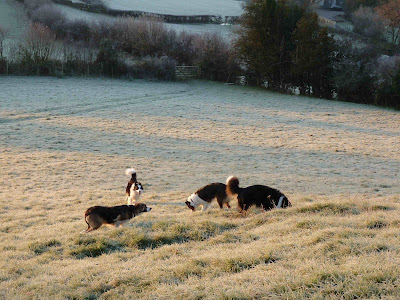 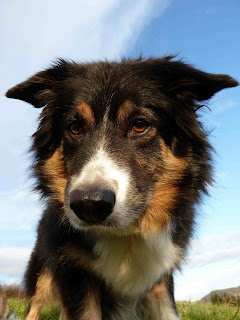