I've skipped time and events again, but have finally got to blog. 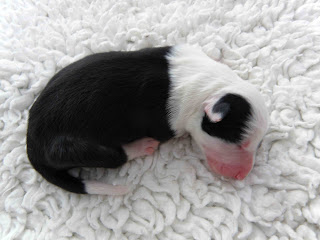 There’s just one of the fabulous six pack of pups remaining with me and I’ve got her for almost another three weeks yet - lots of things to see and do in that time. She’s got a super new home to go to. She’ll be joining a member of a local mountain rescue team who will train her as a search and rescue dog. The Fabulous Fearn has been re-named, but I’ll continue to refer to her as Fearn.

Breeding a litter is a very emotional process. Taking aside the things that can and do go wrong even before the mating has begun, there’s the worry about your very precious bitch - breeding always poses a risk to the bitch. The homing of the pups is also an emotional process. The saying goodbye to a pup can be fairly emotional, but that’s on the cards right from the start. A tear or two has been shed as I’ve waved goodbye to a pup, and that’s mixed in with happiness in the knowledge that I’ve placed the right pup in the right home. 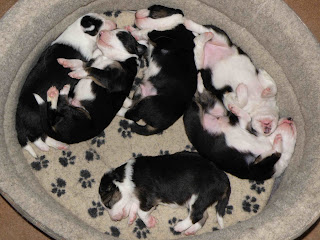 Matching the right puppy to the right owner is vitally important. When a pup was booked from this litter it was made clear to prospective owners they would not be given free choice of the litter. First on the waiting list did not mean first choice of pup. If that’s not liked then people can find a pup from someone who is willing to allow them to make their own choice - many people pick the wrong pup for their personality and lifestyle and sadly many breeders allow them to do so. Even the sex of the pup cannot be guaranteed - a bitch was booked from the litter, it was obvious very early on that one of the boys was the ideal pup for them. It was explained why and they are very happy with him. Everyone has gone away with a pup they're delighted with and with a pup best suited to them.

Out of our litter of six, two owners had their pick and they were working obedience homes, experienced dog handlers who knew exactly the qualities they wanted for their next obedience champ, hopefully. However, had either of them chosen a pup I felt was not right to do the job, then they would have been steered towards another pup. As it turned out, any of these pups would have done any job ... but some were more suited to particular jobs than others. 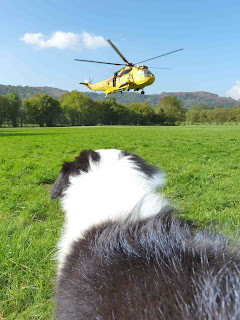 Quite early on, two pups were selected as suitable for search and rescue, a boy who has now gone to one of the obedience handlers and the Fearn pup. A search home was booked before the pups arrived, however, that person decided they’d wait until the next litter. So a pup going spare. Sell her to the first really good, active home that comes along? No, most definitely not. She had qualities too good not to use.

A number of people wanted Fearn, she’s fabulous, there’s nothing not to want about her! People who I would normally consider to be an excellent owner, offering a wonderful home, where my pup would want for nothing and she would have a happy and active life. However, pups suited for search and rescue don’t come along in every litter, I was very lucky to have two of them. So, in Fearn’s case five homes were turned down and I started playing the waiting game.

Occasionally you might find the ideal person for your pup, who can offer the right home and lifestyle, with the right job for your pup to do, but maybe that person might need just a little bit of a nudge for them to realise the timing is actually right!

And so it is, the Fabulous Fearn is heading off in a few weeks’ time to her new home, and in the not too distant future she will start training with the mountain rescue search dogs. Gut instinct comes into this breeding lark, and gut instinct played a big part when deciding this was absolutely the right home for Fearn, and I'm confident my instinct wont fail me. 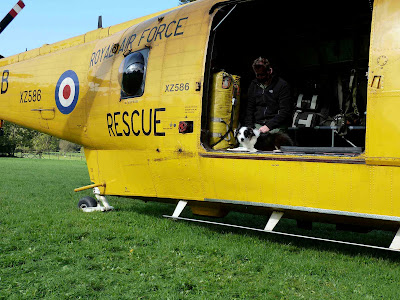 Fearn started her training at the weekend when we went to watch the RAF and mountain rescue team do winch training. She is such a lucky pup, just 15 weeks and she has already had a guided tour inside a Sea King rescue helicopter. She has got to sniff all the smells inside, these she will store in her memory so next time it will be familiar to her. She’s met the RAF crew and is now familiar with the uniform they wear. Most importantly she’s sat in very close proximity to a helicopter taking off and landing three times. As much as the pups were accustomed to noises using a noise CD played from when their ears opened, including a helicopter, there is nothing better than the real experience. The noise as the engine starts up, the smell of aviation fuel, the tremendous sound as the rotor blades start up and the huge amount of air, and articles, blown around as a result of the downwash from the rotors. What did the Fabulous Fearn do whilst all this was happening? Well, apart from the initial surprise, she watched the helicopter as it came in to land and as it took off ... and she played with her tuggy the whole time.