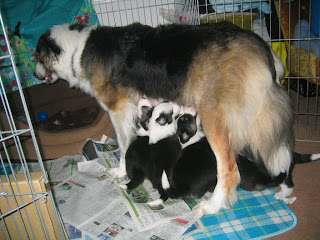 Wow, I can't believe how quickly the last two weeks since the last blog has gone. There seem to have been so many developments and things going on in Puppy World. Where to start?
By the pups' two week birthday all ears and eyes were open ... they sort of looked around with a dazed look. The sort of look you get when you've woken someone from a very deep sleep. That lasted a number of days, but now at three weeks their eyes are clear and fully open. The pups can't see a lot at this stage, they will be seeing out of focus blobs! It's been very entertaining as their paw-eye co-ordination was a bit rubbish at first. You could see them sitting, looking at another pup in front, then after a little while of what looked to be intense concentration, the paw went up, a swipe at pup in front was made. Missed. Pup fell over. This happened lots.
They were wormed at two weeks old and weighing on a daily basis continues. By two weeks all were 1kg or more, by three weeks they're around the 2kg mark. 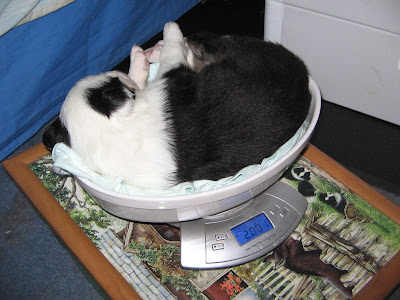 They've gone from the stage of discovering they actually have 4 legs to stand on, to wobbling around. Showing my age, but I always think of the TV advert 'weebles wobble but they don't fall down'! Well these puppies wobbled and they did fall down, lots. They graduated from standing, wobbling and falling, to standing and taking their first steps. Then they'd have a number of steps, and whilst the momentum was going, the speed increased ... they'd keep going until they stopped. The stopping process was usually determined by just how quickly they bashed into the side of the whelping box. How much can they motor at three weeks? Well, they're now in a puppy pen, when the sides are opened up they're off ... behind the sofa, under tables. They can now motor very, very nicely.
I love this stage of puppy-hood. To watch pups develop at any stage and then to continue that into learning and training as adults is wonderful, but I feel the 3-4 week stage is just magical, but so brief. This is the stage when they really start to respond to humans. "Puppies, where are those puppies" said quietly above the whelping box when they're sleeping gains an instant response. They happily come to me, tails are wagging. They've been playing with each other for a little while but now they respond to me as a human and interaction starts. They are playing with toys. The favourite at the moment is a funny little fleece dumbell, it's got heads and ears at each end with bells in the ears - they love that.
The downside of hitting the 3 1/2 week stage is the increased amount of piddling and pooing. There's lots of it. Cafe Latte Girl is doing a very good job of keeping them and their whelping box or pen clean and tidy. I sometimes wish she wouldn't. She still loves to come and give me sloppy licks on the face. Oh how I wish she wouldn't ... the breath smell is pretty unpleasant!
Since Wednesday the pups have been having one meal a day. Just puppy food soaked for an hour or so in warm water, then blended to a puree. Today, Sunday, the meals go up to two a day. Cafe Latte Girl is still doing a tremendous job of feeding them and she will continue to feed them just so long as she wants to. I don't believe in restricting Mum from feeding her pups. Why on earth would you? The puppy food given to the pups will take pressure off Mum, it would take a lot out of her to maintain the level of feeding that she's done so far.
Whilst CLG has been feeding her pups, her own meals have been increased. She's been having puppy food with lots of good extras such as fish, chicken, tripe, etc. Interestingly she's gone off eggs since the pups were born. Up to that point she was having 4-5 eggs a week. She's been having just as much food as she wants - she's the best judge of her requirements at this busy stage. I am thinking of buying goats before her next litter, or buy shares in a goat's milk distributor ... she's gone through gallons of the stuff. I don't feed cow's milk to the dogs, they can't digest it and with some it can cause the runs. We've enough peeing and pooing going on without the runs too! She's also having a puppy milk replacer which I got just in case there were problems when the pups were born. No such problems thankfully, but the milk replacer, NutroLac, is goat's milk based and is a powder you just whisk up with water. She loves it and I like it too, it mixes with no lumps. Excellent! Addition of the milk gives her valuable calcium. She isn't on any supplements as using a very good quality food and the milk should take care of that. If I wasn't confident in the quality of the food, then I would give her a calcium supplement. Eclampsia is a life threatening condition that anyone who breeds should be aware of. It's brought on by extremely low levels of calcium in the blood stream in lactating (nursing) bitches. It's usually combined with poor diet during the pregnancy period and particularly post-whelping. It's totally different to eclampsia in humans which is to do with pressure abnormalities during pregnancy.
Pups are having a weekly appointment with the nail clippers! The first week of clipping was really hard, their nails were so tiny. I can see them now! It's surprising how quickly they grow and just how sharp they get. By taking off the tips saves CLG's belly being scratched raw.
They have travelled out in my van many times and are wonderful travellers. There is a huge advantage of Mum being a good traveller, travelling with her they will be totally relaxed, because she is. They are listening to the noise CD three times a day. The volume is being increased just a little bit every few days. There's no rush to reach full volume. The worst thing would be to upset them by having the noises too loud, with the gradual increase and playing at times when they're sleeping, feeding or playing, ensures full volume will be reached before 8 weeks and they wont have a care in the world, whilst all the humans in the vicinity will be taking cover to avoid the noise. 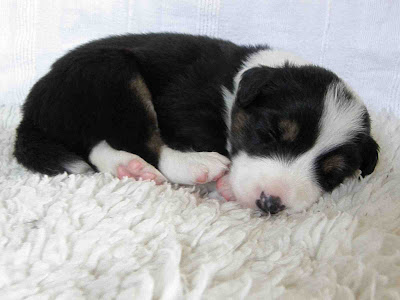 The big dogs are being very good, it's been a bit tough on them as routines have inevitably changed. It's actually quite difficult to dedicate one-to-one time on a daily basis, puppy watching takes up a lot of time. They are great dogs though, and will take whatever comes. Womble Bum and Handsome Lad are doing some training, we're meant to be competing in a couple of weeks, but we'll see. Handsome Lad needs a bit more one-to-one and the Arctic Fox needs to get out to do some more of her scent work.
There will be many changes in the pups during the next week, I can't wait ...
Posted by a sheepdog diary at 19:39