… these two little words are usually the first uttered when people hear my response to their question about the number of dogs I have. I’m not sure what the response will be now … now the New Boy has arrived. 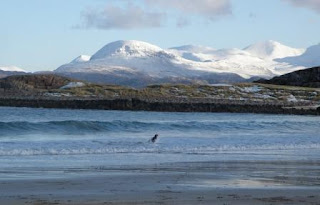 At 6.40 it’s a cold, dark winter’s morning and I’m sitting in my car on the harbour side in Aberdeen. I’ve driven for nearly 4 hours through snow and ice to reach this point. Finally the big, blue and white ship comes into harbour and docks after its 13½-hour sail from the Shetland Isles via Orkney. I start to feel impatient and I urge the passengers and vehicles to unload so that I can go onboard to collect my lad. Finally, Security gives me the go ahead to drive onboard. I enter the car deck, yellow-jacketed men are all over the place, but no one seems to be interested in waving me in. After touring the car deck I finally find the kennels and am ushered in by yet another Security person. Four big kennels face me and I’m asked which dog I’ve come to collect. I take a look in the bottom kennels, just one occupied – a very big, very sedated (or ultra cool) English mastiff … nope, that one certainly wont do, can’t see it having a very good outrun. I look in the upper kennels. In one a half-black half-white face peers at me inquisitively. Nice looker but not the one for me. In the next kennel, sitting right at the back, calmly wagging his tail is my lad. Although I’ve not seen him since he was 11 weeks old I couldn’t mistake him, striking markings and as handsome as his dad. This marks the much awaited arrival of the 5th dog to join our pack. 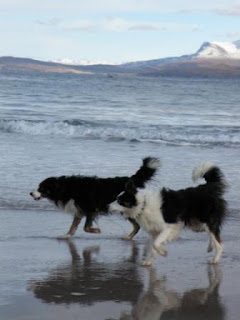 New Boy jumps into his crate in the car and off we head, through blizzards back to the West Coast base that is our temporary home. We were both keenly welcomed by the rest of my pack, together with the extended pack of other family members. Aunty Womble Bum instantly told him who was in charge, ‘that’s fine by me’ he indicated. Handsome Lad, his dad, told him ‘don’t keep getting in my face son’, he took it in his stride. Sister, Arctic Fox, sniffed and instantly dismissed him and future mate Café Latte Girl went over, gave him the once over, told him she was boss and turned her back on him. This is going to work out just fine I thought. 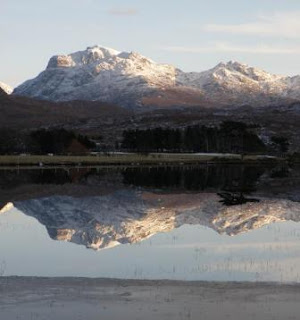 The New Boy fits in well. He’s calm, a good traveller and just the right personality to slot into the group. He coped well with the next few days … with mountains, snow, blue skies and brilliant sunshine there were many places to visit. Beaches to run on and photographs to take, lots of photographs with dogs.